Jennifer (Jen) Crouse considers herself somewhat of an authority on how healthcare should be delivered. During her 16-year healthcare career, she served in a number of professional capacities, including hospital administration. But a hospitalization in her youth, for a spinal cord injury, that she sustained in a car accident, is what ultimately set her on the path of wanting to help others.

“After being hospitalized for several months with my injury,” Jen recalls “I had good insight of what it was like to be a patient. I knew I wanted to be in a profession where I could assure patient care experiences were the best possible.”

Last year when Jen required urgent medical attention, she naturally scrutinized the medical surroundings and care she received. Sheridan Memorial Hospital’s facilities, services, staff and physicians did not disappoint her.

Within a few weeks of moving to Sheridan, to take over as the new executive director of the Sheridan College Foundation, Jen developed a wound and became ill with a fever.

“So new to the community, I didn’t have a doctor. I didn’t know anything about the hospital or its services,” says Jen. When I called Big Horn Mountain Medicine and explained what was going on, staff got me in to see Autumn Barrett, PA-C immediately. It all happened so quickly and efficiently. I was told, ‘Don’t worry, we’ll take care of you.’”

For the next six weeks, Jen required outpatient services in Wound Care three times a week.

“Every interaction I had throughout my care was amazing,” says Jen. “Everyone was always so kind and friendly. From the moment I arrived in the parking lot, I was assisted. The staff handling the front desk greeted both my son and me by name. Savannah and the wound care team were exceptional. They took good care of me. They also provided me with the special supplies that I needed for home care. Despite the difficult circumstance, it was a great overall experience.”

Jen went on to say that the standard of care is higher here than what she would have imagined for a community this size.

“Compared to other hospitals I have worked in or visited, Sheridan Memorial Hospital is a great hospital,” says Jen. “It’s super impressive.”

Jen says her family’s move to Sheridan in and of itself was a big transition in their lives, without having to contend with additional worry.

“I haven’t required this level of patient care since my car accident,” says Jen. “It’s been over a year since I was treated and yet, I can still feel the emotional aspects of it if I think back. One thing certain, the care I received here was nothing short of a blessing.” 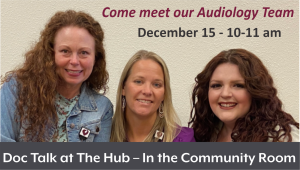