Basketball and running played a major role in Chuck Burgess’ life at Tongue River High School and at the University of Wyoming. He never considered it “working out” because he loved the game.  The motivation was easy and he saw the benefits of his activity in all aspects of his life from an increase in his production levels to an overall wellbeing.

In his early thirties, Chuck was diagnosed with hip dysplasia.  The physician gave him a couple of choices.  He could have surgery or modify his activity. Because he had such a young family, he chose to modify his activity with hopes of putting off surgery until later in life.  No one can fully understand the impact that something like that can have on one’s life until it happens.  He never had to worry about his weight or focus on portion sizes due to his level of activity.

Chuck is the director of finance and supply chain at Sheridan Memorial Hospital, yet he dedicates a large portion of his time to his kids.  He and his wife have three children and are in the process of adopting another.  You can find Chuck on the sidelines coaching his youngest son in soccer or on the basketball court coaching his oldest son and daughter.  His children have developed a love of sports through encouragement and the great examples that he set before them.

Unfortunately, due to his decrease in activity and increase in family demands, Chuck found that it was not as easy to keep the weight off.  He realized that in order to maintain his lifestyle he would have to make some changes.  Those changes were motivated by two important challenges in his life.  One…he knew he was getting close to turning 40 and most importantly … for every 1 pound he gained, it was like adding 4 weight bearing pounds to his hip.  His goal is to try to hold off having hip surgery for another 10 years.  Therefore, he has chosen to modify his diet by eating clean and cutting back on unhealthy carbs and working out on the elliptical machine making sure that he puts in over 10,000 steps / day.

His words of advice are to:

The reward comes when you feel better, are happier and less stressedThe most difficult challenge of all is to change negative habits. It can take up to 6 months to make certain changes and when change is hard, we immediately wonder why we should put ourselves through all that pain.  A resource that Chuck uses frequently and has made an impact in his life is a book by Charles Duhigg, called The Power of Habit. “Motivation is what gets you started. Habit is what keeps you going.”

Chuck has used his FitBit and My Fitness Pal to hold himself responsible since 2012.  It allows him to track his activity, calories taken in and the calories burned.  He loves to set up groups to challenge friends and family so they can hold each other accountable to their goals. 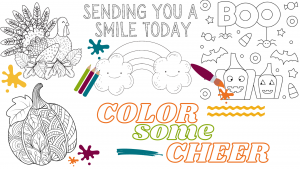