Adriane Duff isn’t the type of person to sit down and just tell you about her life and her healthcare history. In her own humble way, she wants to “help others” and in telling her story, she hopes to offer encouragement.

“I don’t want this story to be about me,” she says right up front. “I’m hoping that by telling my story this way, I can help others by encouraging them.”

When you hear her story, it’s doesn’t sound that different from many people you know. Except for the chemo, the radiation and don’t forget that bone marrow transplant in 1990. After being diagnosed with Hodgkin’s Lymphoma in 1989, rounds of chemo and radiation couldn’t eliminate the disease.

“That’s when they decided to try the bone marrow transplant,” she says. “Back then, that was highly experimental for anything other than leukemia.”

It must have worked, because she was healthy, other than a suppressed immune system which they told her would happen and would get worse the longer she lived.

Fast forward to 2014, it’s a Sunday morning, Adriane thought she was having an asthma attack.

“I was coming up the stairs in my home and I could feel my heart beating in my head. I sat down, took my pulse and thought, ummm, 40, that’s not a good pulse,” she says with a chuckle. “I told my husband we need to go to the ER.”

It was there, in the ER on that Sunday that Adriane’s experience with Sheridan Memorial Hospital (SMH) began.

“Dr. Brennan was there to see me in about 30 minutes, on a Sunday no less,” she exclaims. “He is a very sweet man. He has a heart for people and you can see it in how he cares for you.”

The diagnosis? A pacemaker needed to be installed to regulate her heart rate. But complications from radiation treatments years ago made that a struggle. The leads for the pacemaker were not able to be run through her veins which had been severely constricted due to the radiation treatments from years ago. Her chest would have to be opened up to install the device.

Adriane says she has been told by doctors she is a very unique patient.

“I guess they say that because I have survived a bone marrow transplant as long as I have,” she says with a big grin. “All these health issues can be traced back to that. I just keep working through whatever comes up and I’m very thankful to everyone who has helped keep me healthy.”

Adriane hopes she can encourage people by telling her story.

“There are so many people to thank. People from the Heart Center to Wyoming Rehab to the clinic, I can’t even name them all. They have all been just great and worked to find solutions for me.”

“The doctors have always been very good about working with me. If anything happens, I know they’ll take care of me. We have some very, very good health professionals here. They are here for the community and have our best interest at heart.”

Adriane is retired now and spends most of her days at home with her happy little dachshund, Carlin. She still has to be careful to not contract an infection, but says she gets out as much as she can, takes every necessary precaution and absolutely loves living in Sheridan. 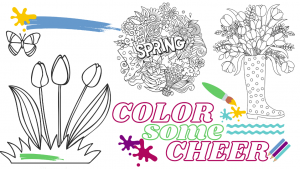